Signs of laziness versus responsibility.

I was asked to write a post on laziness. Where do I start with a subject like this? How about identifying some tell-tale signs that show laziness on your part.

To identify any of these, you have to be willing to be honest with yourself. Frankly honest. Brutally honest. The kind of honest that hurts because you know it’s true that you’re simply avoiding what you know you need to do for your child, and you’ve been choosing to do what you want to do instead.

As I have said before, even if your child is in public or private school, every parent IS a homeschooler, as it is their responsibility to oversee their child’s education and make the decisions as to how that will get accomplished. It is up to you how you see that come to pass in your child’s youth.

Admiral Rickover, the father of the American Nuclear Navy said that “Responsibility is a unique concept… You may share it with others, but your portion is not diminished. You may delegate it, but it is still with you… If responsibility is rightfully yours, no evasion, or ignorance or passing the blame can shift the burden to someone else.” (from Good Reads Quotes)  He was a man who understood what it meant to stand in a position of authority, and knew that the buck did indeed stop with him.

By his example, those men who served under him (including a young man named Jimmy Carter) also knew that if anything went awry on their watch, the buck stopped with them, thus making everyone accountable to the proper exercise of the authority with which they were entrusted, and diligent in every endeavor therein. This enormously valuable quality has been largely lost in our society. It remains a truth, as truth is always truth, but people no longer hold themselves accountable and others have diminished the repercussions of a lack of taking responsibility for one’s actions so as to not be found wanting in this themselves.

Your responsibility as the parent or guardian of a child is solely yours. It does not lessen when you send your child to school to be educated by someone else. You will still hold yourself accountable, realizing that if you don’t do it, it’s presumptive to assume someone else will, and you will have your child’s best interest at heart. 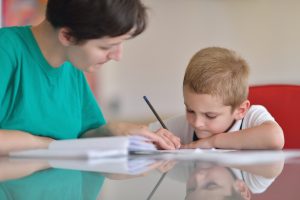 you can take this position with the gravity it is due, you will not become lazy in the education of your child. You will ‘grab the bull by the horns’ and get stuck in to find how best to reach the goals you have for your child’s education.

Start Somewhere. If you don’t, you’ll never get anywhere.