As former Vermonters, we were quite enthralled with our trips to White Sands National Monument. The sand-fine gypsum was unbelievably like the snow we experienced annually in Vermont. But this wasn’t for shoveling. Or plowing. Or slipping on because it had become a sheet of ice with the sustained below-freezing temperatures. This whiteness was just for play! (And science, geology, botany, and zoology.) 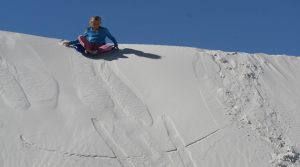 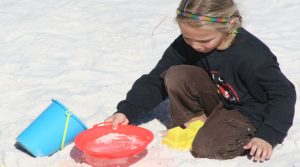 No back-breaking work to get it into mounds was needful, because the wind itself does the work of inching the dunes away from the mountains year by year. Nor did we have to get into dry clothes when our frolicking was called to an end because we had run out of time and faced a nearly three-hour journey home. The one thing that we did continue to find for many weeks was the fine white grains still in pockets, clothing seams and in the car, from simply enjoying sledding down the hills.

While our first two visits to White Sands were purely for the fun of walking barefoot on the warm gypsum, digging and sledding (things we had always done in the snow – minus the barefoot-on-the-snow part), the third and most recent visit was one in which my husband took our children for a several-hour guided hike to where the gypsum is still in its more solid state. The guides at the monument do these tours periodically and the one they went on had a maximum of 5 people, excluding the guide, on the tour. It’s a hike you book ahead rather than just show up to experience.

White Sands is located in the Tularosa Basin which is surrounded by the San Andres and Sacramento Mountains in New Mexico. Rain water runs down from the mountains into the basin, bringing with it the dissolved gypsum. The water then evaporates out of the lake, Lake Lucero, and leaves behind it the selenite crystals which are gypsum in its crystal form, like ice is steam’s crystal form. 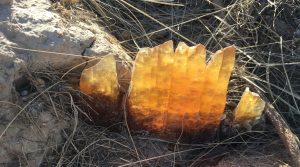 The wind, which always comes from the same direction, then picks up the crystals and by causing them to bump into each other, breaks the crystals down into the fine powder that is blown and becomes the shifting sands of the dunes. At White Sands you get to see the whole process, not in actual motion because it happens relatively slowly, but in its various stages. 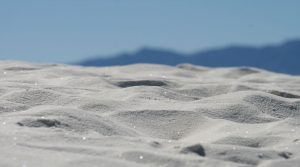 The mineral gypsum (but not that from White Sands) is used in sheet rock, Plaster of Paris (the stuff that a doctor will add water to that then becomes a cast if you break a bone in your arm or leg) and toothpaste, to name a few items.

Near White Sands are the towns of Alamogordo, Las Cruces and Cloudcroft. Cloudcroft is a bit of an oddity in this part of the Chihuahuan desert with an elevation of over 8,500 ft (about 4,000 ft above Alamogordo, rising quickly in under 20 miles of road). The temperature drops at least 20 degrees Fahrenheit from Alamogordo at the base to the top of the mountain, and Cloudcroft itself is neatly nestled among thousands of evergreens, with some deciduous trees sprinkled in. Part of the distinctiveness of Cloudcroft, aside from its green vegetation, is the fact that in the middle of a dessert, there is a ski slope! Even from that elevation, White Sands can be seen in the distance as a vast whiteness.

If you’re in the area of southern New Mexico, White Sands is well worth the trip. Bring a picnic lunch, a notebook and pencil to do some work at the visitor’s center and take some notes. When your notetaking and ‘learning’ is done, take off your shoes and run barefoot over the dunes. This, too, is learning! 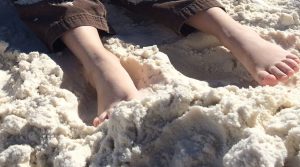 Start somewhere! You never know where it will lead you.