The fundamental basis for science is observation. It starts by looking around and being interested in your surroundings. Galileo didn’t study science in a laboratory. Neither did Newton, Archimedes, Louis Pasteur or George Washington Carver. They spent time outside, watched and interacted with the world, observed how people worked with things, and sought to come up with solutions to make things better or  more efficient.

Spending time outside in nature is so incredibly valuable. Our children have always been required to be out of doors at least a couple of times a day. My husband wisely said that they needed to stretch their legs and run off some energy, especially the boys, though the girls are right there with them. The surprising and unforeseen benefit of them having spent so much time outside is that they have become keen observers of nature. They find all kinds of animals, birds and creepy-crawlies. 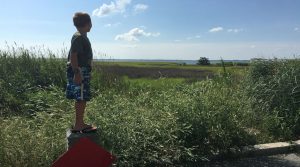 Three years ago we went to visit some children with their parents in Ocean City, Maryland. My children and I had some time to kill, so we went looking for something to do that didn’t cost any money, somewhere we could explore. Without finding anything obvious, I parked the car in a cul-de-sac and the above picture is where we spent some time, looking at nature in the distance that we couldn’t get to. My country-born children were bored in a city that many consider exhilarating. That is, until we found where we could access the natural feast surrounding the city.

Ocean City is surrounded by an extremely rich feast of natural wonder: from the roaring ocean itself, to the things that live in and around it, to the ponies at Assateague Island.

We had the privilege of introducing the children we’d come to visit to fishing and crabbing, and the wonders of science through observation of the outdoor world. We showed them how to catch crabs by tying string around raw chicken necks (bought at the local bait and tackle store or grocery store’s meat department), which they then hung over the edge of the dock. We pulled out our fishing rods and introduced them to fishing. It was catch and release of everything as the creatures were too small to take home and enjoy, but much joy was had over the experience of interacting with the creatures of the water.

We visited Assateague Island National Seashore where we partook of free ranger-led clamming. We saw the ponies, for which Assateague is famous, roaming around and getting nourishment from the grasses that grow along the water, as well as roaming where the cars and people were. We swam in the Atlantic Ocean, found shells on the beach, and arranged them by the colors of the rainbow. The children found stranded horseshoe crabs and returned them to the ocean in the hope that they would live. 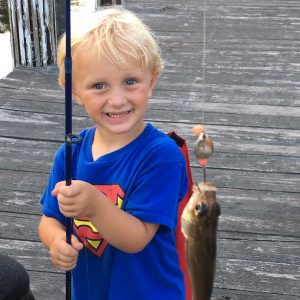 The little boy in this picture was very tentative as he tipped his toe into the unknown (to him) waters of fishing. But he watched and participated, and was very thrilled with his first catch. He then had the opportunity to help release the fish so it could live longer and grow big, as he hopes to do.

Coming back to homeschooling and what it is: anything can be part of homeschooling, if you use it. For example, if the boy never fished again or had a conversation about fish, their habitats, life cycle etc., his fishing may have simply been a fun experience on one day of his life. By giving him a rod and then letting questions flow naturally from him as others interacted with him, he was able to learn more about the area in which he lived and the creatures with which he shared it. That’s a very simple and easy way to incorporate homeschooling. It brings things to life and makes things real, tangible, and exciting. 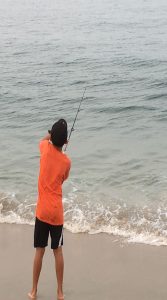 This puts a different spin on the old saying of the fish. Give a child a fish and you feed him for a day. Give him a rod, teach him to fish, and spend some time with him answering questions about it, and you ignite his curiosity, and he will love learning all his days. That is a success story!

Start somewhere. You never know where it will lead you!